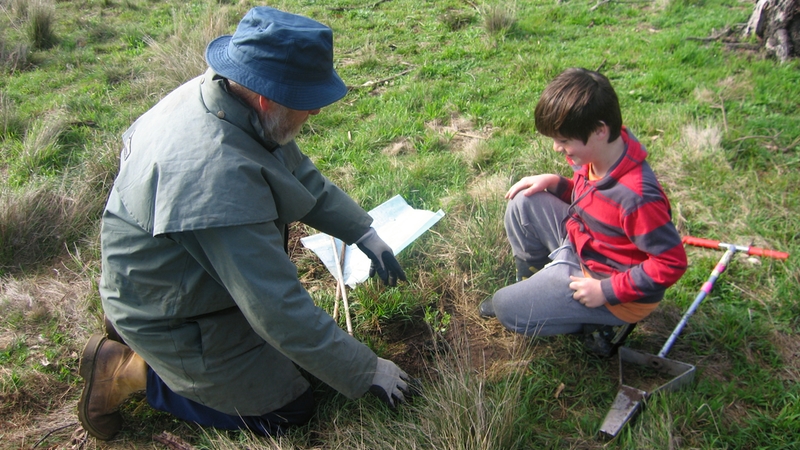 Batesford, Fyansford, Stonehaven Landcare Group, (known as BFS Landcare), has its origins in the Landcare movement which was established in 1989 by the late former Prime Minister, the Hon. Bob Hawke. Well ahead of his time, he could see that Australia needed to focus on sustainable land management practices and environmental conservation. Now Landcare Australia supports over 6,000 groups and 100,000+ volunteers with Landcare projects. It is evident that there is an increasing need for organisations such as Landcare in Australia if we are to preserve healthy biodiverse ecosystems which support all life.

Here is a short history of BFS Landcare. But firstly this is a list of the work our volunteer members have been involved in over the past twenty years.

We have developed or been active with the following projects:

In 1989 a small group of farmers in the Stonehaven district, just south of Batesford, joined Landcare to gather support for the management of the devastatingly large and destructive numbers of rabbits appearing on their properties at the time. Following this, the discovery of the prolific and destructive potential of the Serrated Tussock weed was an equally devastating challenge. Both these pests are to this day a continuing threat to agriculture and the health and biodiversity of natural ecosystems. They were also engaged in monitoring the levels of salinity of the Landcare area and the Barwon River and its tributaries. Later the Stonehaven and District Landcare Group was extended to incorporate some Fyansford members and became the Fyansford, Stonehaven Landcare Group. To improve the river zone in Fyansford many native trees were planted along the lower reaches of the Moorabool near the Barwon, evident to this day and now mature.

As rural residential development crept out to Batesford in the 1970’s and 1980’s, the Blackall family, earlier Batesford residents, created the first subdivision west of the River on farm land between the Midland Highway, Dog Rocks Road and Blackall Road. New rural-residential landowners, (now described as peri-urban), were being encouraged to plant shelter belts and copses of native trees and shrubs to improve the natural environment and the local biodiversity. The Blackalls were keen to preserve the rural character of the area and the allotments were large, each landowner on purchase being given 200 native tube stock shrubs and trees to enhance the natural environment while adding to the sense of place. Protective covenants preventing further subdivision were attached to each block, street lighting was kept to a minimum and large nature strips provided the only pathways.

In the 1990’s the Batesford area was still mainly agricultural but housing developments were beginning to expand as farmers saw opportunities to subdivide . In the late nineties the Fyansford, Stonehaven Landcare Group, including, farmers Bill Honey, Des Guinane, Keith Hawkins and the Gugger family, all original members, found it difficult to continue with such a small group. They eventually amalgamated with some interested rural residential Batesford residents, Helen and Rob Percy, Felicity and Peter Spear, George and Lit Belcher and Geoff Case, to name a few. They wished to preserve, maintain and improve the natural assets in and around Batesford, educate the growing peri-urban population about living with natural ecosystems and agriculture, and find ways to provide pleasant and protected places for recreation for the growing population. The group became the Batesford, Fyansford, Stonehaven Landcare Group Inc. (or BFS Landcare), and was incorporated in 2001.

It was Helen and Rob Percy, with the assistance of the Geelong Landcare Network, ( of which BFS Landcare is a member), and its Facilitator at the time, Bronte Payne, and later Elissa Ashton Smith, as well as the two Councils which straddle Batesford, the City of Greater Geelong and the Shire of Golden Plains, who initially took the initiative and drove the work and enthusiasm for the Batesford projects. Helen later received a well deserved Landcare Award for her valuable work. Firstly planning to enhance Primrose Creek and its ancient River Red Gums with complementary indigenous plantings, creating a biodiversity corridor and walking track which is now Red Gum Reserve. Later assisting the Belcher Family to rehabilitate their Flora and Fauna Sanctuary, as well as planning the walking track which is the Moorabool River Reserve, (part of which is leased long term to CoGG owing to the generosity of the then owners, the Belchers, in releasing 750metres of their land to enable the path to be formed).

BFS Landcare and the Geelong Landcare Network assisted and continue to assist the current owners of the Dog Rocks Flora and Fauna Sanctuary, (originally called ‘Lilydale’ Sanctuary), to rehabilitate and preserve this last remaining natural grassy woodland in the Geelong region, with its valuable biodiverse flora and fauna and its diverse birdlife. The Sanctuary was overrun with the prolific weed South African Boneseed, also a problem in the You Yangs. This is a continuing challenge. The Honey Woodland to the south of the Sanctuary owned by farmer Bill Honey, is also a valuable remnant grassy woodland with large and beautiful old River Red Gums, a recently planted biodiversity corridor along Dog Rocks Road, and a newly planted Silver Banksia nursery to replace the original ones that were there in earlier times. Both properties, with their ancient Devonian granite outcrops, are connected geologically to the Dog Rocks Reserve, (owned by Trust for Nature).

It was also evident that the Moorabool River, known as a very beautiful and unique river from its source near Ballarat to its confluence with the Barwon at Fyansford, was in an increasingly degraded and fragile condition owing to the use and abuse of water rights along the length of the River, the provision of water to Ballarat, and the rerouting of the River using concrete channels by the limestone quarry between Batesford and Fyansford. Felicity Spear and Peter Spear continue to advocate for the Moorabool River and environs on behalf of BFS Landcare group.

In 2000 the Batesford community came together to oppose the ill informed decision by the Golden Plains Shire to permit a power station at Stonehaven to be built close to the large, newly established housing estate carved out of the surrounding farmland beside the Dog Rocks and the Sanctuary. Siting such an industry so close to a newly created development of young families, and where the prevailing south west wind would inevitably carry toxic emissions over them and on to suburban Geelong, seemed opportunistic and poor judgement on the part of the Golden Plains Shire Council. The Batesford community, including BFS Landcare, joined together to oppose this decision. As a group we appealed unsuccessfully to VCAT. Subsequently the parent company , Enron, which was funding the power station, collapsed. Fortunately the project died with it.

So for the past twenty years, and as housing development in Batesford has increased, a very small and committed group of BFS Landcare members, the core of which is called the ‘kitchen cabinet’, has been attempting to preserve and enhance the natural environment in and around Batesford, working on the projects listed at the outset of this text. We have had moral support from financial but non-active members, and on ground support from a handful of active members, financial and on ground support from the CoGG and GPS Councils, the co-operation of local landholders, the assistance of Government and Council grants, the support of the Geelong Landcare Network, the involvement of Trust for Nature, school groups (in particular Covenant College Year 9 students for the past ten years), Conservation Volunteers Australia, and Green Corps, local volunteers, TAFE students, the Stonehaven CFA for use of its premises for meetings, PALM, (People for a Living Moorabool) and GFNC, (Geelong Field Naturalists Club). We are grateful to them all.

BFS Landcare’s work has been focused on establishing connections between the grassy woodlands and the Moorabool River in order to stimulate interest and appreciation for these, and more importantly to preserve, maintain and build connections between the valuable ecosystems in the region. These are increasingly threatened by poorly planned housing developments, increased traffic and inappropriate speed limits near reserves, uncontrolled cats and dogs, weed and rabbit infestations, all impinging on the already fragile remaining grassy woodlands and the native flora and fauna and the ecosystems which are in fact our lifeline and will become more so. Science tells us that everything is connected, so as more and more species vanish or drop to near extinction, the rate of extinction of the survivors accelerates. Some of our members have also been active in the recent Batesford Highway Action Group activities in an effort to demonstrate that a future proposal for a 4 or 6 lane highway through any section of Batesford would put at risk the twenty or more years of work which has gone in to ensuring that the natural assets of Batesford are preserved and enhanced, and would degrade the community’s sense of place.

Needless to say, although we have willingly worked volunteering our time with Landcare for the past twenty years, finding volunteers to assist at our events, and to share some of our organisational roles is an increasingly pressing challenge. We think it’s time we had some help from others who are attracted to Landcare values and are keen to ensure that what we have achieved in Batesford is maintained and expanded into the future along our beautiful Moorabool River and its biodiversity corridor. Sharing any volunteer work and spreading the load means that it’s not an onerous commitment and it’s also a pleasant way to connect with others in the community. Let’s hope that Batesford will benefit from a continuing interest in preserving its sense of place and the beautiful natural environment in which it is situated for future generations.