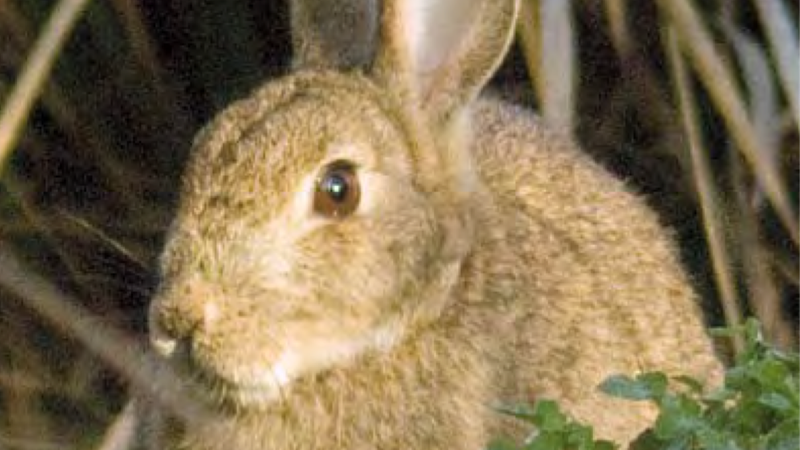 Things you should know about rabbits, their habits and environmental impact.

European wild rabbits are invasive, feral pests throughout much of Australia. They cause considerable damage to the natural environment and to primary production.

Prolific breeders, feral rabbits quickly became established over much of Australia, with the exception of more northerly regions. Their populations rise and ebb with the seasons and, unless controlled, they can reach plague proportions in favourable times.

Feral rabbits eat crops and compete with livestock for pasture. As recently as 2004, after more than a century of control programs, rabbits cost Australian primary producers $113 million per year in lost production and control costs. They are also a significant contributor to widespread soil erosion (impacting infrastructure and waters), and the destruction of perennial pasture plants, particularly when their populations are high.

Environmental damage is now the biggest problem caused by feral rabbits in Australia. Feral rabbits compete for feed and shelter with native animals, but most environmental harm comes from how they graze, and because they help maintain feral predators.

Rabbits have clearly contributed to the decline or loss of the:

How to protect your property and minimise the damage

Rabbits have a small mouth and rodent-like teeth for close grazing, and are selective feeders – they search out tiny seedlings of the most palatable species and remove them before they can grow and reproduce.

Rabbits don’t fell ancient, giant trees – but they do seek out and eat every seedling of preferred species within their grazing range before they can grow. Once mature trees die, the species is lost as there are no younger plants to replace them.

The immediate impact of rabbits may go unnoticed, but the lack of plant recruitment can change the whole structure of vegetation communities, with flow-on effects for the native birds, reptiles, invertebrates and other animals that live within.

The ability of rabbits to target individual seedlings also makes them a threat to programs regenerating native vegetation or establishing carbon plantings.

Compounding the problems is the fact that seeds of some plant species, particularly in dry regions, only germinate after exceptional weather (such as summer storms or localised flooding in very wet years), which may only occur once every couple of decades. If feral rabbits are around at those rare times, then the plants have lost their one in twenty year opportunity to bolster their ranks.

Feral rabbits faced few of their traditional diseases when introduced to Australia, but they did come up against a few predators. Some, like the rabbits, were recent introductions to the country, for example foxes and feral cats.

Feral rabbits can be an important part of the diet of cats and foxes, sustaining their populations, which in turn leads to increased predation on small-to-medium sized native fauna. By maintaining fox and feral cat numbers, rabbits have indirectly contributed to the loss of native species. Australia has lost more native mammal species than any other country.

The startling transformations of islands where rabbits have been removed—such as Phillip Island and Macquarie Island)—and the condition of islands which have remained rabbit-free—for example, Kangaroo Island—are testament to the profound environmental harm caused by rabbits.

Make sure you join a rabbit eradication program in your area in the late summer/early autumn.

How to protect your property and minimise the damage